0
Price
From€3,750
Our prices depend on the package you chose and the amount of participants.
Save To Wish List

When you book with an account, you will be able to track your payment status, track the confirmation and you can also rate the tour after you finished the tour.
Sign Up
1041

Why Book With Us?

Do not hesitate to email or call us. We are an expert team and we are happy to talk to you.

Ride through stunning scenery, different altitudes, extreme temperatures, and challenging road surfaces whilst discovering the magnificent landscape, culture, and history of Ethiopia. Visit the birthplace of the Queen of Sheba, the ‘Jerusalem of Africa’ and ‘Africa’s Camelot’. MotorHike to the beautiful Simien National Park, along the Blue Nile, and to the top of the only lava lake volcano in the world. Be one of the few to ride in the hottest place on Earth. We cannot promise you an easy ride – but we can promise you the ride of a lifetime!

Dates of the tour:

If requested and possible, the dates can be slightly adjusted to the clients need.

Duration of the tour:

The tour will start with a cultural evening in one of the best restaurants of Addis. The perfect environment to meet your fellow motorcycle riders and enjoy delicious Ethiopian cuisine seasoned with very energetic Ethiopian dancing.
Overnight in Addis Ababa

The first part of the tour will take you to some of the most recognizable places in Ethiopia: Bahir Dar, Gondar, the Simien Mountains and Axum.

Bahir Dar, which is located by the shores of the fabled Lake Tana, the source of the Blue Nile is one of Ethiopia’s most attractive towns and the perfect base from which to explore the area’s main site: the island monasteries of Lake Tana.

The visit to Lake Tana’s monasteries will start with a boat trip during which you can admire the hand-made papyrus canoes, which still navigate Lake Tana, different birds and maybe hyppos.

During the 13th and 14th century this region received monks seeking the isolation and peace ideal for lives devoted to prayer, fasting and study. The result was the construction of small monasteries alongside churches.

As you ride North to Gondar the landscape becomes more and more spectacular. Gondar with its numerous castles and churches is also known as the Camelot of Africa and one of the major attractions of the historical route. Visit the castle-palace of King Fasilidas and the church of Debre Birhan Sellassie (Mount of Light of the Holy Trinity) famous for its beautiful winged angel decorated ceilings and many other frescos.

Registered as a World Heritage Site by UNESCO The Simien Mountains National Park will signal the start of your off-road experience in Ethiopia. Made up of several plateaus separated by broad river valleys it makes up one of the most marvellous landscapes of Ethiopia; a perfect contrast with the upcoming trip to Dalol. The park is interesting because of the uniqueness of its endemic animals, the beauty of its flora and the majesty of its impressive landscape. If you would like to rest from the bike and do some trekking this is the right place.

Visit Axum slabs and monolithic obelisks, churches and historical sites. Axum was the centre of power of the Axumite Empire, one of the oldest civilizations in Africa.

Mekele and day 9 will be the start of the trip to Danakil. An enjoyable ride through wonderful landscape and villages. Site seeing of Mekele.

The ride to Dalol is now almost all paved! Do no expect anything as hard as it use to be. The ride is made worst by the very high temperatures reached during day time and riding will be done only at defined hours of the day.

The Afar Depression is one of the most inhospitable and spectacular regions of the world, full of eye-catching colours. The desert has several points lying more than 120m below sea level and temperatures can rise above 50°C. Visit the Asale Salt Lake, where salt is still extracted using ancestral techniques.

Amongst the all the attractions the Danakil Depression has to offer, the active Volcano of “Erta Ale” is possibly the most well known. Expect an hardous ride through sand and sharp stones. There are no defined tracks and GPS will be our only guide. It will take us approximately 4/5 hours to make the 82 km until the first post. Two hours and 25 km later we will be at the base of the volcano where we will set up camping.

The 2 to 3 hour hike into the summit of the volcano will start very early. The Danakil Depression has several Volcanoes but “Erta Ale” is the most accessible and spectacular. You will have the chance to admire the volcano during all hours of the day, the most spectacular being dusk, night and dawn. This is also the chance for a much deserved rest!

The trek back to the base of the volcano ends the Danakil visit. Relaxing after the Danakil trip will come naturally, but those who still have some energy left may visit the market of Mekele.

Before the return to Addis you will visit Lalibela, riding through a high altitude curvy road which offers an extraordinary scenery. This is an exceptional, enjoyable ride through great landscape on one of the less travelled routes in the country.

Lalibela which is also known as the Kingdom of the living rock or African Jerusalem is famous for its churches carved out from red volcanic rock dating back to the 12th & 13th Centuries. Ethiopia is home to more World Heritage sites than most countries in Africa. The churches at Lalibela are perhaps the most prominent of all and Ethiopia’s top attraction.

The road to Addis is made up of new asphalt with lot of changes in altitude and temperatures, but as usual the landscape is fantastic. In the evening of the last riding day the group will have a farewell dinner in one of the best restaurants of Addis chosen by you. There are many good Restaurants, Bars, Discos, Jazz Live Music and Cultural Dance venues to offer if you want to extend your stay.
Overnight in Addis 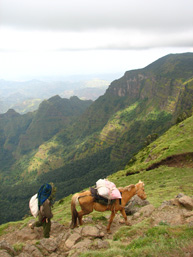 Other tours available by request 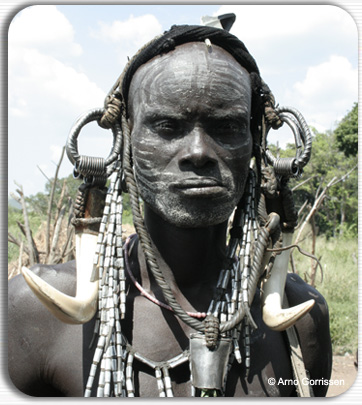 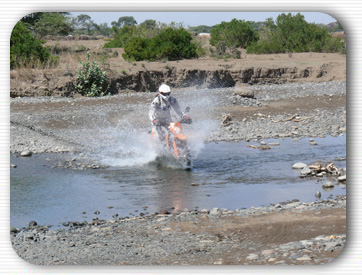